Student of the Week: Edwin Neimandt 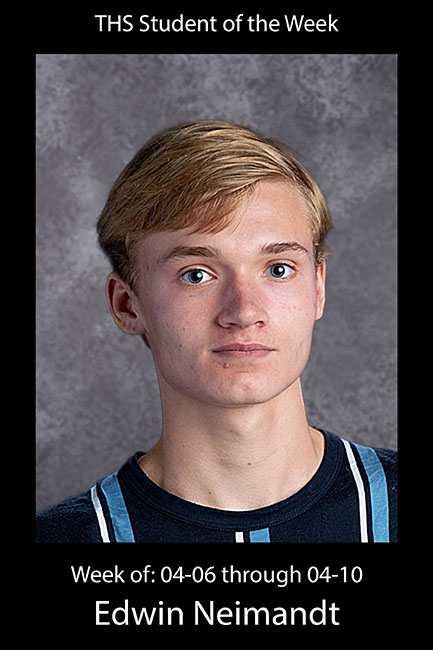 Sophomore, Edwin Niemandt, is the second THS Virtual Student of the Week.  He was nominated by Mr. Neuland who reported, “Edwin’s artwork is outstanding and he has been productive at home while being cooperative with the online learning requests.” Edwin explained his online learning is successful because he creates a schedule for himself and builds in breaks.  His goal is to attend college for his dream job as an industrial or product designer. In Edwin’s free time he enjoys photography, drawing, and biking. He misses taking part in track. For the track team, Edwin participated in the long jump, high jump, and hurdles.

An interesting tidbit about Edwin is that the majority of his family lives in South Africa.  He and his parents had plans to visit South Africa this summer, but with the pandemic those plans are up in the air for now.  Edwin’s favorite part of the culture in South Africa is the food and more specifically the candy is much better there.

If you are looking for a Netflix recommendation, Edwin liked Locke & Key.