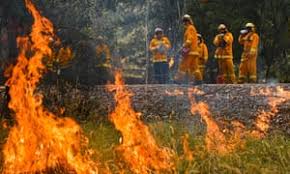 As most people are aware, Australia is on fire. It has been on fire since September of 2019, the fires have continued to grow and spread as the months have passed. The citizens of the nation are in danger, and lots have been attempting to flee. While this is a fairly well known issue at this point, some may be unaware as to how the fires even began, how large the fires are, as well as what is being done to help.

Australia has a season where fires are common, like how some states have seasons where tornadoes or hurricanes are common. In 2019, continuing into 2020, Australia’s fire season has been worse than usual. Australia has been having a drought as of late, recently the nation had rain for the first time in months. The drought of course doesn’t help the fires. The fires this year were mainly caused due to Australia’s drought, as well as the rising temperatures of Australia. Not only that though, as some fires were started by people and on purpose. It seems the people who start fires on purpose are usually just doing it because it brings them pleasure. Though the fires that are started on purpose are only a small percent of them, it is still something to be aware of. The fires in Australia have been continuing on for a long time, but they are also extremely large.

The fires in Australia are large, growing, and take up a major part of the nation. As of now, the fires cover 1.5 billion acres of Australia. Not only do the fires take up a large part of the country, they’ve also caused major damages. As of this moment, 17 people have been killed by the Australian fires. Though that is not an extremely large number, it’s still a lot of people to die by these fires. Not only have people died in the fires, animals have died as well, lots of them. Over 1 billion animals have been killed in these fires. Some native Australian animals will have to be put on the endangered species list due to this. This is just some of the damage caused by the fires, and it’s a lot. One may be wondering what’s being done about the fires, and there are a few things that people are doing.

To start off, firefighters are working to try and stop the fires in Australia. The firefighters are fighting from the ground as well as in the air via planes and helicopters. Other than this, there are many things to raise money for Australia and to help them. Anyone can donate and lend a hand to them. Some places you can donate to are,the Victoria fire departments, as well as to the New South Wales fire departments. Other than that, bringing awareness to the fires is another way people are fighting it. It is a serious issue and a problematic one, this issue will continuously be updated as it goes on.