The Origin of Santa Claus 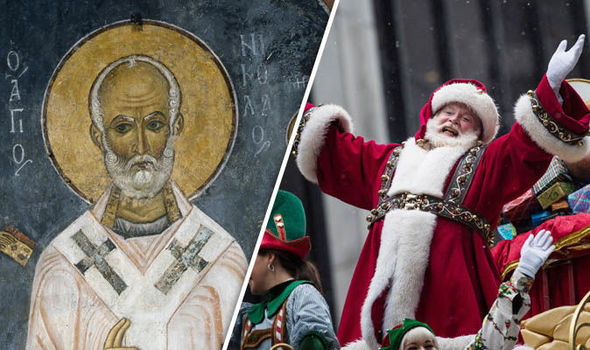 With Hallmark showing Christmas Movies since the beginning of November and people singing Mariah Carey’s “All I Want for Christmas is You”, it is apparent people are excited for Christmas. Now that it is actually December, people seem to be spreading Christmas joy. And, after all, the holiday is just around the corner. Children await Santa Claus to bring them all the gifts they’ve been waiting for by singing Christmas carols and watching Christmas movies. Santa is widely celebrated in America and around the world. So, with that being said, where did Santa Claus come from?

Santa Claus, a man with a sled and flying reindeer who delivers presents to all the children in the world in one night, is actually based on a real person. The Catholic faith celebrates people who have died for their faith, and these people are called saints. The saints that Catholics celebrate represent something based on their life. Jolly ol’ Saint Nick, or Saint Nicholas, is the patron saint of children. In his life, Saint Nick was a bishop and delivered goods to the sick and needy. It is said that Saint Nick helped three poor women, who were about to be sold into slavery or prostitution, by leaving money in their home at night so they would be able to get married instead. Saint Nick became a very important figure in Europe and he represent children and gift giving, he gave to pretty much all who were in need, which is why Santa Claus gives gifts on Christmas.

There have been many Christmas classics, some of which refer to Santa as Kris Kringle. The Germans and the Swiss refer to Kris Kringle or Christkind, meaning “Christ child” which has to do with the birth of Jesus Christ, or Christmas. Americans have used Kris Kringle as another name for Santa Claus, and the Name Santa Claus didn’t originate in America either. The Dutch pronunciation of Saint Nick is Sinter Klaas which has been Americanized to Santa Claus, which is what he is commonly referred to as today.

Santa Claus became popular in the United in the late 1700s, when his jolly appearance was created, and in the early 1800s when holiday shopping became popular. Stores saw how attracted kids were to Santa and things related to him that they started to dress people up as Santa to attract more customers. Newspapers then started to make a section dedicated to holiday shopping which helped start the consumer aspect of Christmas. These holiday traditions had since been passed on and are, obviously, still being celebrated today.

Knowing how long Saint Nick has been in history, Santa Claus and Christmas shopping are fairly recent traditions, relatively speaking. And regardless of the different names people call Santa Claus, everyone recognizes that jolly smile and that big red coat. Even though Saint Nick never flew around in a sled pulled by reindeer, he made a huge impact in Europe and is celebrated by Americans every year, whether they know it or not.