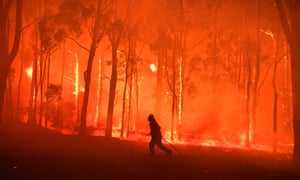 New South Wales in Australia has recently been introduced to emergency-level bush fires which don’t seem to be going out. In November, 77 fires have burst out along the coastline claiming at least one hundred homes, injuring at least 30 people, and taking someone’s life. On November 8th, fire claimed around 900,000 acres of land and at least 2.4 million acres since then.

There is a bush fire season in Australia, but these bush fires are unusually high in the Forest Fire Danger Index. 1974 and 1984 held the record for most burned land in New South Wales and the fires currently burning have almost reached that record. And since fires are spreading, it’s likely that the bush fires will claim more land this year, and come even closer to Australia’s records. The difference of the fires today is that they’re burning homes of people, not just remote land, so even though it has not reached the record yet, it seems to be doing a lot more damage.

Fires are claiming land of both people and animals. Eucalypt forests (koala habitats) are tall and wet forests that are also going up in smoke. Dried swamps are also seen burning, the organic and natural sediments in the ground catch fire and destroy habitats. These fires are destroying more land of animals which causes populations to decrease. The reason for these predominately wet habitats burning is a lack of water. January through August of 2019 had such a lack of rainfall that it hit a record in some areas of New South Wales, the area being affected by the fire.

Many are pointing the finger at climate change due to the increase of temperature, which rose 1.5 degrees since the early 1900s. A rise in temperature has caused doubts in the areas affected by the fires and a lack of rainfall.  No matter the reason, the forest fires in New South Wales are burning and danger is high. Hopefully these fires are soon under control because there is going to be a lot of ecological damage left behind.