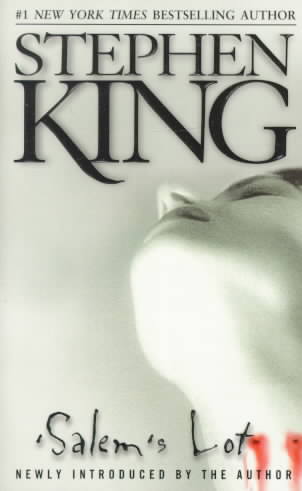 ‘Salem’s Lot is a horror novel written by Stephen King. It is the second book King published and was inspired by Bram Stoker’s Dracula as well as some comics with vampires King read when he was younger. The book follows the events in a small town in Maine called Jerusalem’s Lot, ‘Salem’s Lot for short, when two strangers move into the abandoned house overlooking the town. Not only is the house abandoned, but a murder-suicide occurred there years before, causing it to become a local legend. The residents of ‘Salem’s Lot begin to notice strange things happening such as a dead dog being hung on the gate of the cemetery and a young boy disappearing only for his brother to die mysteriously while in the hospital shortly thereafter. No one knows what is happening as the bodies begin to pile up, only to disappear later on. However, a few of the town’s residents realize that something is going on defying everything they believe to be possible.

Throughout the book, Stephen King follows different characters throughout the town. The characters that receive the most focus are Ben Mears, a writer visiting town; Susan, a local girl who ends up in a relationship with Ben; and Matt, an old English teacher at the high school. Other characters receive more focus but not evenly throughout the book. The overview of characters gives readers a good idea of what is happening throughout the town, even when some of the characters in the story are left guessing. King also sometimes leaves a plot point before the event is complete, not returning to it until the next chapter after other plot points are introduced. Although this may be somewhat annoying for someone who wants to know what happens, it successfully builds suspense and all loose ends are eventually tied.

I thoroughly enjoyed reading this book. As always, Stephen King was very good at creating suspense and keeping me invested in the story. One comment I have is that there were a lot of characters introduced throughout the book in rapid succession which made remembering who was who a bit difficult when they weren’t mentioned for a while. However, this didn’t really impact my enjoyment of the book. There was nothing quite nightmare-inducing in the book, but there were many parts that I found frightening or at least unnerving. I would highly recommend this book to anyone who is a fan of Stephen King or is looking for a good vampire horror story.