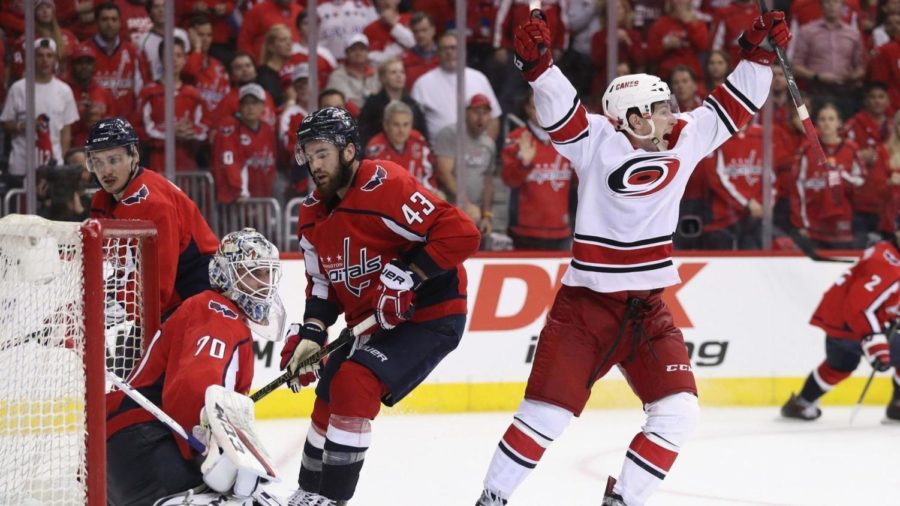 Coming off of last years Stanley Cup win the Washington Capitals were determined to fight for another shot at the cup. Heading into the playoffs the Caps has a pretty convincing regular season record finishing 48-26-8 and 4th among the entire league. The Capitals also locked of the number one spot in the Metropolitan division meaning they would play the first wild card the Carolina Hurricanes from the start of the first puck drop it was known that it would be a tough and hard fought series.

It was a very back and forth series; the first two games going to Washington, the next two games to Carolina, then an even split in following two games sending it into an exciting game seven. A game seven is not what the Capitals were looking to be dealing with in the first round. But the hurricanes are a good squad and were going to be tough to beat. In the first period the Capitals netted two quick goals, one unassisted from Andre Burakovsky (#65) and another from Dmitry Orlov (#9) to Tom Wilson (#43). At this point the Capitals had a lot of momentum and control of the game. The second period was full of scoring with 2 goals for the Hurricanes and one by Evgeny Kuznetsov for the Capitals. In the third period Jordan Staal put on in for the Hurricanes to tie the game up. In the closing seconds of the game a capitals shot was deflected by a Carolina defender just before it crossed the goal line. Carolina season had been saved and the same was tied 3-3 going into overtime.

The game ended up lasting two over time periods with both teams carefully protecting their net and playing very conservatively. However as time went on the Hurricanes began to emerge as the more confident overtime team as they were in the regular frames. Throughout the season the Hurricanes were thought to be one of the best teams in league when they get sent to overtime. After taking nine consecutive shots in the second overtime they snuck one passed goalkeeper Braden Holtby. The Capitals play off run had been cut short.

Heading into the off season Washington looks to make changes to their roster to be the best possible team to come back and compete for another cups. After the game many player looked to thank the fan of the organization for their constant support and love. Injured Right Wing T.J. Oshie who was out with an injury with his collarbone, went to twitter to show is appreciation for such an amazing fan base. “Thanks Caps fans for all of you Support. We had a hell of a ride as the Champs!!” he tweeted after the loss.