Part 1: Back to the Homeland 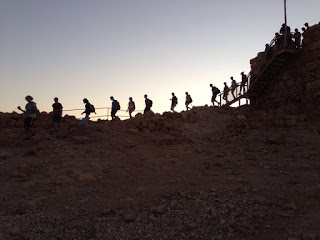 I’ve always known I’m Jewish, but have never necessarily felt what that really means. This summer I traveled overseas to Israel with 100 of my peers from different summer camps, similar to mine for a program called MBI (Machaneh Bonim b’Israel). At first, it just felt like six other camps I had yet to build a relationship with, but by the end we were able to come together as the Zionist (a movement for the re-establishment/development/protection of a Jewish nation in Israel), youth movement (Habonim Dror North America) we all are. However, it wasn’t that easy. The cities may be old- but our connection to Israel was new and ready to flourish.

We arrived at Ben Gurion International Airport in Tel Aviv on July 7th. Everyone was overwhelmed by the new faces and taken back by the smells of the airport. “Where’s the Starbucks around here?” I questioned as I tried to decide between Aroma Espresso Bar and Cofix iced coffee. Choosing my new go-to drink was the least of my worries, considering that I didn’t know half of the people in line with me.

Throughout my five weeks in Israel we stayed in over 15 different places, everywhere from the Negev down south, up to the Sea of Galilee in the north. Some were youth hostels (an establishment that provides cheap accommodations aimed mainly at young people such as students or travelers), and some were hotels, but Kiryat Moriya was the first [hostel]. It was centrally located in Jerusalem to make touring easier the next couple of days. The youth hostel was comfortable and also housed soldiers from the Israeli Defense Force (IDF). Introduction to the trip started off with a tekes (ceremony) and many trigger games; we refer to icebreakers as trigger games because they trigger your senses in order to wake up the brain in preparation for the upcoming, intellectually stimulating, peula (discussion). Peulot (discussions) was a big part of MBI so we could better understand topics of social injustice like the Arab-Israeli conflict, while we experienced it firsthand.

From the beginning, the 101 of us were split into five different kvutzot (groups). My peers lived anywhere from Calgary, Alberta to the Upper West Side, so you’d figure we wouldn’t all have much in common- you’d be wrong. Whether some of us have attended machaneh (camp) all our lives, or were new to the program, we were ready to begin the journey exploring ourselves and how we understand our own jewish identities right where it started- Israel. And this is where my journey began. Next week I’ll be posting my second segment to share my journey with you.